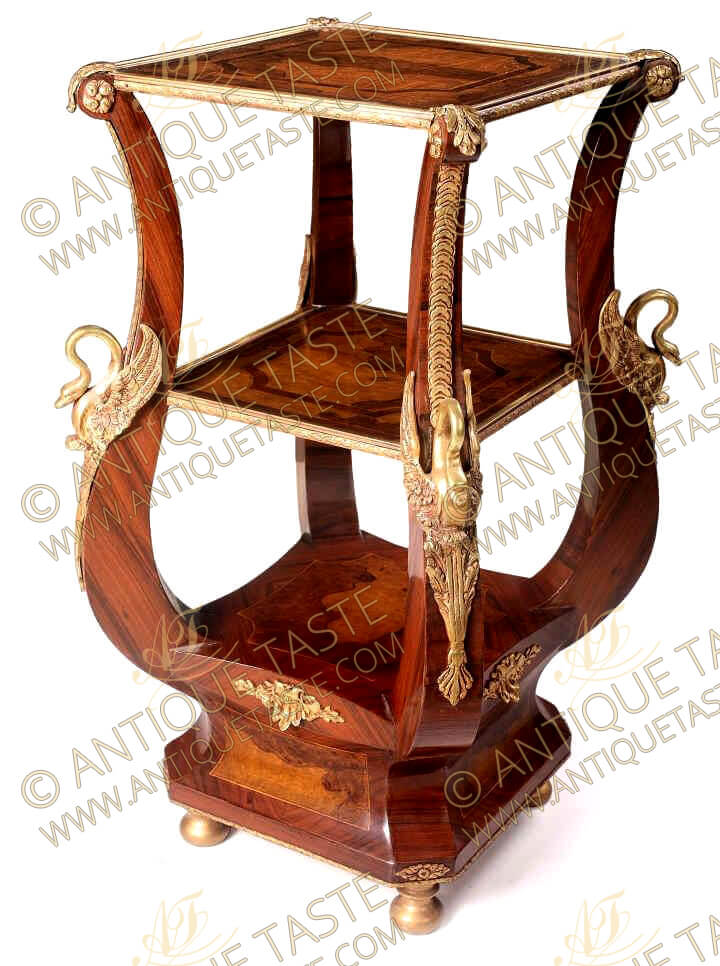 The lyre shaped hipped turned cabriole supports inlaid with acanthus leaves, blossoming rosettes and trailing leafy strip terminating with a sensational accented winged swan on each leg above a concave veneer inlaid plinth with ormolu filet and raised on round gilded bun feet.

The emergence of Neoclassicism was possibly the result of cultural changes, but people were also beginning to tire of the graceful but by now rather sugary Rococo taste. One cannot rule out the possibility that the new aesthetic approach to interior decoration may also have provided a pretext for the newly formed court of Louis XVI to assert itself. The Marquis de Marigny, Madame de Pompadour's brother, was replaced as superintendent of the beaux arts by the Comte d'Angivillier. However, while Louis XV participated vigorously in the artistic trends that flourished during his reign, the same could not be said for his nephew Louis XVI, who seemed entirely insensible to aesthetic considerations of any kind and certainly to the style that took his name. The very most that captured his attention was the mechanical furniture created for the court by Jean-Henri Reisener (1734-1806), a German cabinet-maker working in Paris.

Just as the Louis XV style had inspired the Italian Rococo, so again the stylistic changes that were taking place in France were felt in Italy. Valentino Brosio defines as Louis XVI style all Italian furniture until 1795, and reserves the term "Neoclassical" for the successive Directoire Empire and Restauration periods. Guiseppe Morazzoni, however after pointing out various differences between the French and Italian styles, defines early Neoclassicism as the style that was developed in Italy during the time of Louis XVI. Ever alert to changes of taste in Versailles, Turin embraced Neoclassicism early but re-elaborated it. The taste for the antique, relived of the "burden" of archeology, retained some traces of Rococo frivolity; and Greek friezes and carved gesso beading against Rococo-inspired cream, pale green and blue lacquered grounds would soon replace rocaille carving.

A typical Piedmontese feature for the sofa was the medallion motif, which would be positioned in the centre of the seat back. More popular in Piedmont than in any other region was the demilune commode, which was embellished with veneers of precious woods and inlay. By disregarding the subdivisions for drawers and compartments, figurative scenes or geometric marquetry could be freely developed. The flat surfaces of the Neoclassical style inspired cabinet-makers like Ignazio Revelli (1756-1836) and his son Luigi (1776-1856) to create real "marquetry paintings" of landscapes, scenic ruins and architectural perspectives, taken from their own drawings, or, more frequently, from watercolors or prints of notable artists of the time such as Piranesi. Revelli's efforts, similar to Guiseppe Magiolini's (1738-1814) in Lombardy, represented a period of transition from Louis XVI to the 19th century.

Just as Pietro Piffetti was the chief exponent of the Piedmontese Rococo style, so Guiseppe Maria Bonzanigo (1745-1820), official wood carver and designer to the crown, played an important role in defining the Louis XVI style in Pedimont. Nevertheless, his classicism was expressed in the clarity of his furniture's architectural structure, enhanced by the rich decorative apparel with its al antica motifs. His skill and precision in carving placed him squarely in line with the expressive vocabulary of the next century.