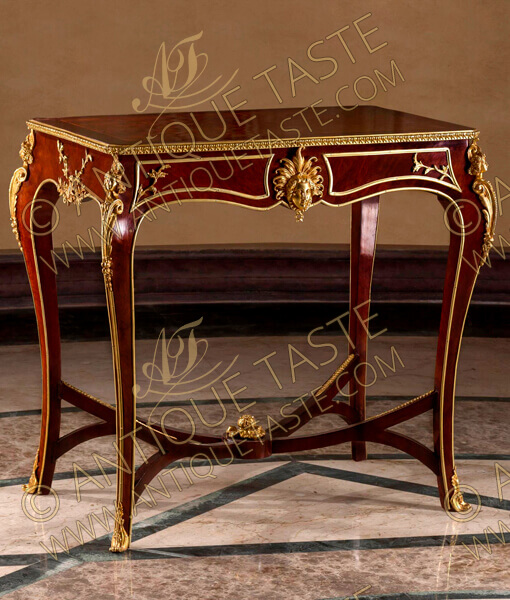 The table is raised by very elegant cabriole legs with acanthus shaped turned ormolu sabots and ormolu border that continues around the frieze and joined by an inverted curved double X stretcher adorned with a central ormolu leafy acorn in acanthus finial,

At the top of each leg are exquisite and intricately chased ormolu chutes mounts of highly detailed busts of classical wigged maidens graced with scrolls and a feather headdress on a large beaded acanthus volutes and blossoming terminals,

At the arbalest shaped frieze a central glamorous ormolu mount of a female face with elaborate leafy headdress amidst acanthus foliate patterns and a braided hair elongated and entwined under the chin. Flanked by ormolu panels imitating faux drawers cornered with thriving branch. The back is likewise.

The sides are ornamented with a central ormolu mounts of blooming leafy branches,

A French sculptor (1842-1901), best known for his sculptural collaboration with Francois Linke for the 1900 Paris Exposition Universelle. Messagé was also responsible for much of the design and creative work for Roux et Brunet and Joseph-Emmanuel Zwiener.

Message was primarily influenced by rococo ornament but he strove to re-interpret it. He did not produce slavish copies, and his original approach can be appreciated in Linke's celebrated Grande Bibliotheque and Grand Bureau exhibited at the 1900 Paris Exposition Universelle. A number of drawings by Message are recorded and after his success at the exhibition of 1889 he was encouraged to publish his designs. There were five sections to the book, with an elaborate title page surmounted by the sculptor's cipher or talisman of a wing, a pun on his own name as the messenger to the Gods, a motif he used many times on the handles of furniture designed for Linke.