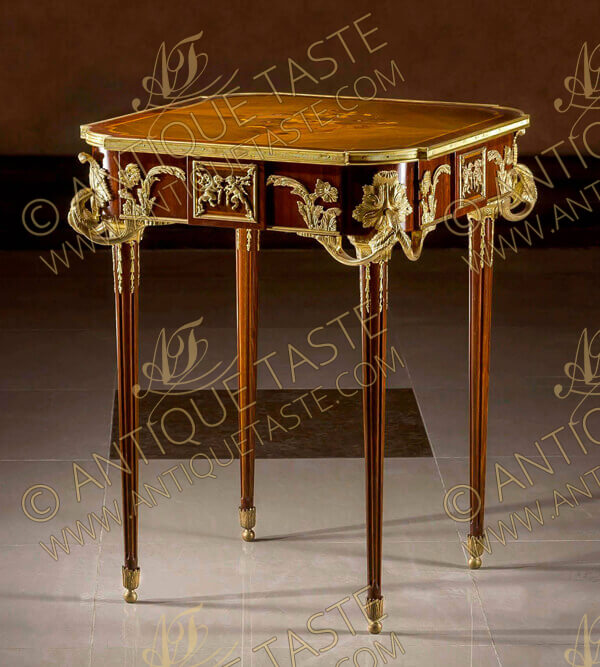 At the top an elegant floral marquetry inlays in a different quarter veneers, all fitted within an ormolu fluted gallery,

The original table was supplied in 1771 for King Louis XVI's garde meuble. It was commissioned by Pierre-Elisabeth de Fontanieu, Intendant et Contrôleur général des Meubles de la Couronnefrom 1767-83. The cabinet work was made by Jean-Henri Riesener, maître in 1768, fournisseur du Garde Meuble de la Couronne from 1774 to 1784. The original is now in the permanent collection of the Musée de Versailles, on display at the Petit Trianon.

Jean-Henri Riesener, (born July 4.1734, Gladbeck, Münster [Germany]—died Jan. 6.1806, Paris, France), the best-known cabinetmaker in France during the reign of Louis XVI. Riesener was the son of an usher in the law courts of the elector of Cologne. After moving to Paris he joined the workshop of Jean-François Oeben in 1754, and, when Oeben died in 1763, Riesener was put in charge of the workshop and later married his master’s widow. He made his name by completing and delivering to Louis XV the famous bureau du roi (“king’s desk”), begun by Oeben. In 1774 he was made royal cabinetmaker and from then onward was the regular supplier of furniture to the queen, Marie-Antoinette. Although he was one of the most versatile of cabinetmakers, his services were in little demand during the French Revolutionary period because of his political status. Riesener used both European and exotic woods, with a preference for mahogany; he occasionally used lacquer and mother-of-pearl to enrich the surfaces of his works. His finished style was pure Louis xvi, with its rectilinear side view and harmonious ornamentation.