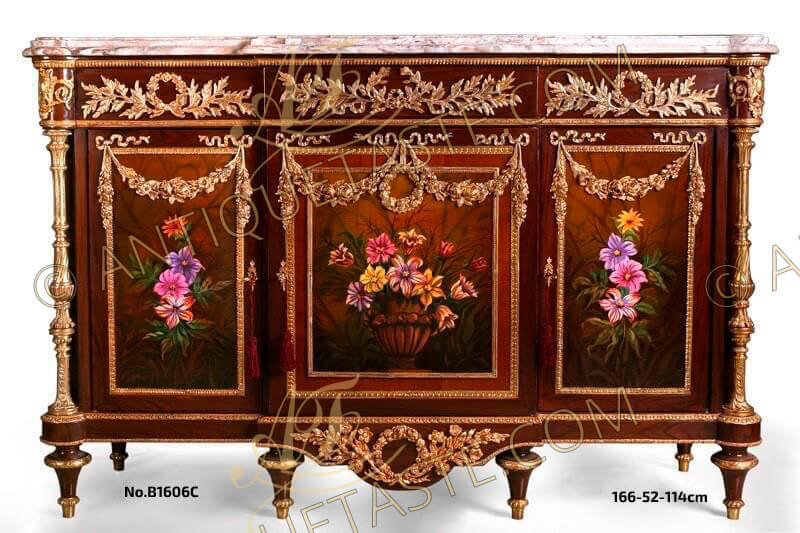 A French Louis XVI style ormolu-mounted veneer inlaid Sideboard, after the model by Martin Carlin, circa 1880 with eared breakfront moulded marble top above a frieze-drawer mounted with ribbon-tied ormolu laurel wreath, over three cupboard doors hung with floral garlands and decorated with paintings of flower and roses by our artists, all within Cyma Recta style ormolu borders, the fluted ormolu chinoises columnar angle supports over a shaped frieze, on six toupie feet.

In spite of his French name, Martin Carlin was born in Germany and emigrated to Paris to become an ébéniste. He settled there with other German and Flemish craftsmen and took employment in the workshop of Jean-François Oeben, whose sister he married. Inventories made after Carlin's death show that the ébéniste and his wife lived modestly in a five-room apartment in the Faubourg Saint-Antoine, an unfashionable quarter of Paris, with simple furniture, a few pastel portraits, and a black lacquer clock. Few of Carlin's wealthy clientele would have cared to venture into this area, and Carlin thus sold his works exclusively to middlemen such as the marchands-merciers Simon-Philippe Poirier and Dominique Daguerre.

Carlin was particularly known for his furniture decorated with Sèvres porcelain plaques, which he began to make in 1765, following designs supplied by the dealer Poirier. Although he made a certain number of larger pieces, secrétaires, tables, and commodes, Carlin's most popular works were small, portable, and extremely elegant items such as small tables, music stands, and jewel cabinets. A master of the Neoclassical style, he also produced works set with lacquer panels and veneers of mahogany.