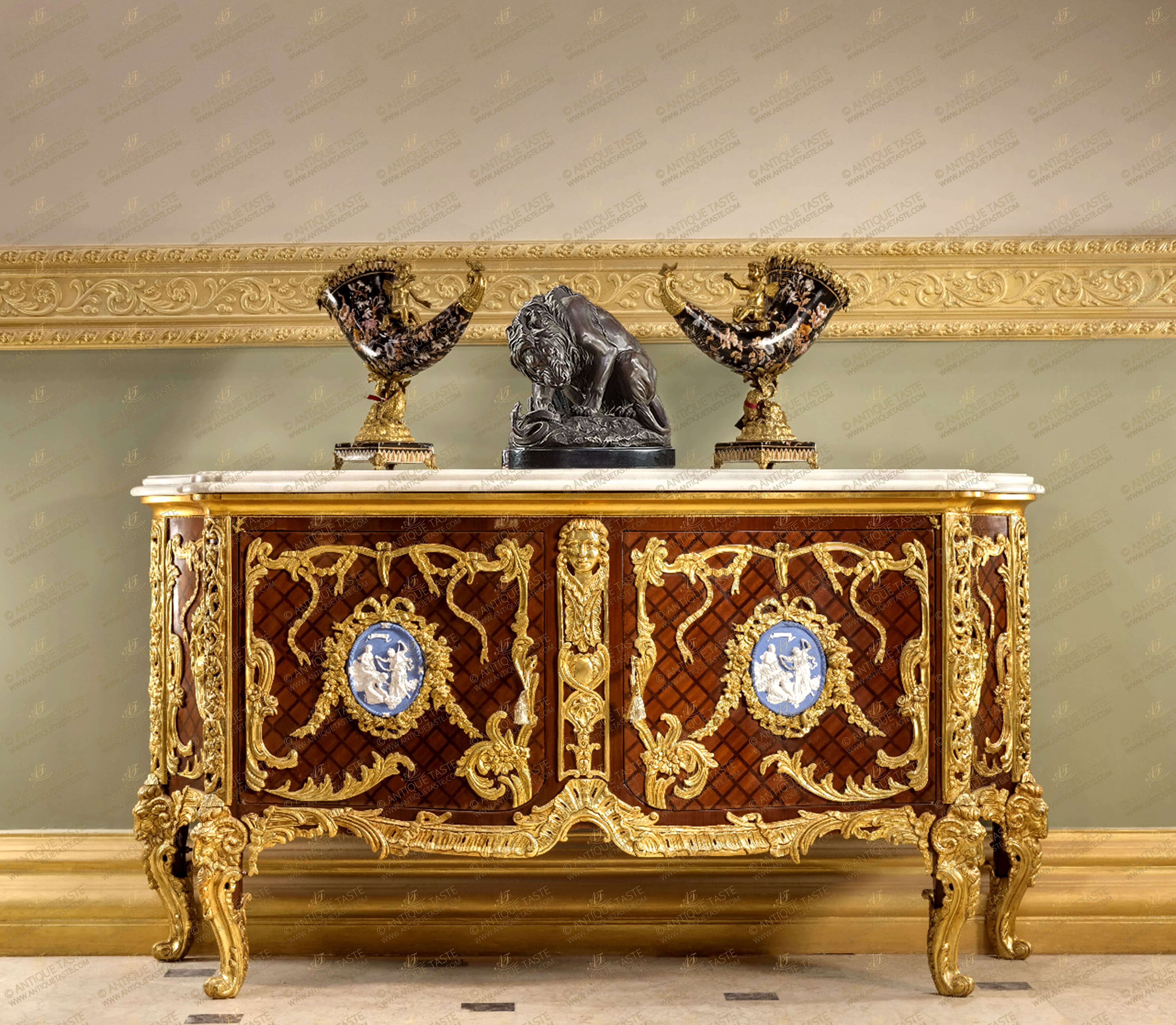 Our exquisite copy of the French late 19th century Louis XV Régence style gilt-ormolu-mounted and parquetry veneer inlaid commode a vantaux after the model Commode de Louis XV du château de Fontainebleau - Commode Médaillier designed by the Slodtz brothers and executed by Antoine-Robert Gaudreaux, made for le cabinet du Roi at Versailles with a serpentine veined moulded marble top above a pair of doors with one tier inside, each door centered by an ormolu oval one with a cherub and goat, the other oval with Ariadne on a leopard, all within marvelously chiseled ribbon-tied acanthus leaves and blossoming flower swaging garlands, We produced a new version with wedgwood-jasperware-plaques as displayed; all on a diamond parquetry ground veneer inlay centered by an ormolu female mask on scrolling ormolu works and shell on a very fine ormolu scalloped shell form apron with acanthus leaves scrolls, the sides each with a further similar oval medallion within the same ormolu tied scrolling frame, and raised on astonishingly chiseled and burnished ormolu cabriole legs with scrolled ram-headed capitals.

The original precious commode-médaillier was designed and created in 1739 for the king's use in Louis XV's Cabinet à Pans at Versailles. It is now in the Cabinet des Médailles at the Bibliothèque Nationale.

This commode is based on the famous kingwood medal cabinet supplied by the Royal cabinet-maker Antoine-Robert Gaudreaus (1682-1746) on 10 January 1739 for the Cabinet Interieur. It was referred to at the time as 'Par les Srs Gaudreaux ébéniste et Slodtz frères, sculpteurs, pour servir dans le cabinet aux tableaux avant la petite galerie à Versailles'. The bronze mounts were modelled by the Slodtz brothers. The commode was a popular model amongst Parisian makers during the second half of the 19th century and many variants of it were made.

Gaudreaux who was appointed Ébéniste du Roi was a French cabinetmaker who from 1726 became the main supplier to the Garde Meuble de la Couronne. From 1726 until his death, first as Ebéniste de la Reine and then as Ebéniste du Roi, he exercised a virtual monopoly over commissions intended for royal residences, much of which he subcontracted.

The son of a cobbler, he established himself in the Faubourg Saint Antoine, an area of Paris favoured by ébénistes, becoming maitre in 1708 and building up a successful workshop. In the 1720s he moved into the centre of Paris to the rue Princesse. During the period 1726 to his death in 1746 Gaudreaus supplied more than 850 pieces of furniture to the Crown, of which two-thirds was in walnut or cherry and was largely for everyday use. He also supplied much grander pieces, veneered in kingwood, palissander and amaranth (purplewood). Typically for the Regence period he mainly used plain veneers or marquetry with geometric effects. Commodes were an important part of his production; Daniel Alcouffe has counted 375 in the day book of the Garde-Meuble, making up almost half of his consignments, of which 111 were veneered, 252 in solid walnut and 12 in solid oak.

He did not work exclusively for the royal family but had important private clients including the marquis d'Antin, the comte de Clermont, the duc de Bouillon, the duc de Saint-Simon, the prince de Chalais and the duc de Valentinois. He was succeeded in his workshop, for a brief time, by his son François-Antoine Gaudreau (died 1751), also Ébéniste du Roi.